Inconvenient Truth #7: The curious case of Bin Laden’s Family on 9/11 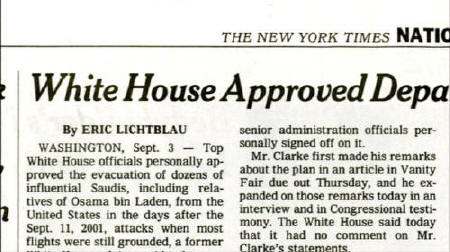 One of the “conspiracy” theories that people decry is that on 9/11, though all aircraft were grounded (for a week), Bin Laden’s family was allowed to leave the United States.  Of course, interviewing Bin Laden’s family (if available) would’ve been crucial in determining his where-about’s, money sources, recent movements, etc.

We need only look at the Memo for Record, in support of the 9/11 Commission Report, that was formerly classified, to find out what the Head of Massachusetts’s transportation  says.  The memo’s were all the interview’s done during the 9/11 “investigation” and were supposed to be the material from which the commission created it’s report.  There is no grey area here; her recollection is clear.

The “She” is Virginia Buckingham, Head of all Massachusset’s transportation facilities, including Boston Logan Airport.  This is from the FOIA released documents about the 911 commissions investigation (bet you never heard this on the news).  Note the comment from the State Dept when they were asked about the flight.  You can read her transcript HERE, as a separate extract, or read the first set of documents HERE, (Her statements start on p. 383).

[U] She was aware of the charter flight from Saudi Arabia that left from Boston containing Saudi officials and Bin Laden family members. Her recollection was that it happened on September 19th, after the airspace was reopened. She recalled that there still may have been a restriction on aircraft flying in from certain countries. Buckingham wanted to make sure it was properly cleared and her concerns were over who was to fly out and whether the security rules were being flouted. She recalled that the flight came to Boston from Canada. Kinton called the State Department etc and the response he got was to “let them go.” She was also told there was going to be FBI “observation” of the flight.

Later she read that the flight had made many stops around the country.

"Orthodoxy means not thinking-not needing to think. Orthodoxy is unconsciousness." -1984
View all posts by SleepNoMore →
This entry was posted in The Vault. Bookmark the permalink.

1 Response to Inconvenient Truth #7: The curious case of Bin Laden’s Family on 9/11