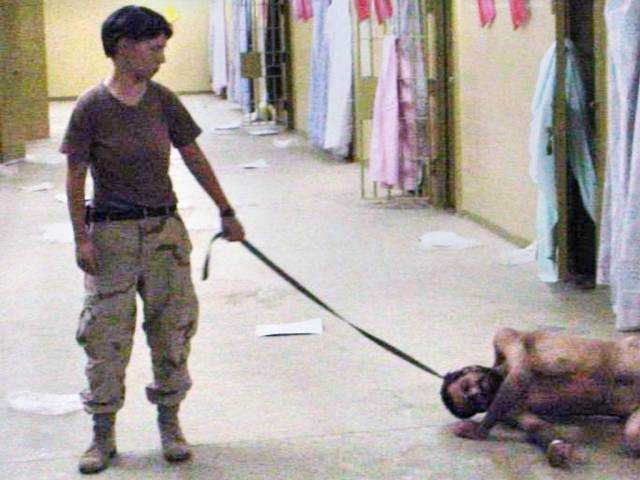 (From Wikipaedia article):  Beginning in 2004, human rights violations in the form of physical, psychological, and sexual abuse, including torture, rape, sodomy and homicide of prisoners held in the Abu Ghraib prison in Iraq (also known as Baghdad Correctional Facility) came to public attention. These acts were committed by military police personnel of the United States Army together with additional US governmental agencies.

Revealed in the Taguba Report, an initial criminal investigation by the United States Army Criminal Investigation Command had already been underway, where soldiers of the 320th Military Police Battalion had been charged under the Uniform Code of Military Justice with prisoner abuse. In 2004, articles describing the abuse, including pictures showing military personnel appearing to abuse prisoners, came to public attention, when a 60 Minutes II news report (April 28) and an article by Seymour M. Hersh in The New Yorker magazine (posted online on April 30 and published days later in the May 10 issue) reported the story.

But, what exactly did the Taguba Report state?  The following findings were reported:

(NOTE:  (S) means that item was classified as “Secret”, another story in itself, as when does mistreatment of prisoners become classified, as being a danger to the security of our country?  It was, in fact, an embarrassment to the Administration, and that is why it was classified.)

"Orthodoxy means not thinking-not needing to think. Orthodoxy is unconsciousness." -1984
View all posts by SleepNoMore →
This entry was posted in Al Qaeda, CIA, Iraq, Terrorism, The Vault, Torture, War Crimes. Bookmark the permalink.

1 Response to Inconvenient Truth #18: What happened at Abu Ghraib